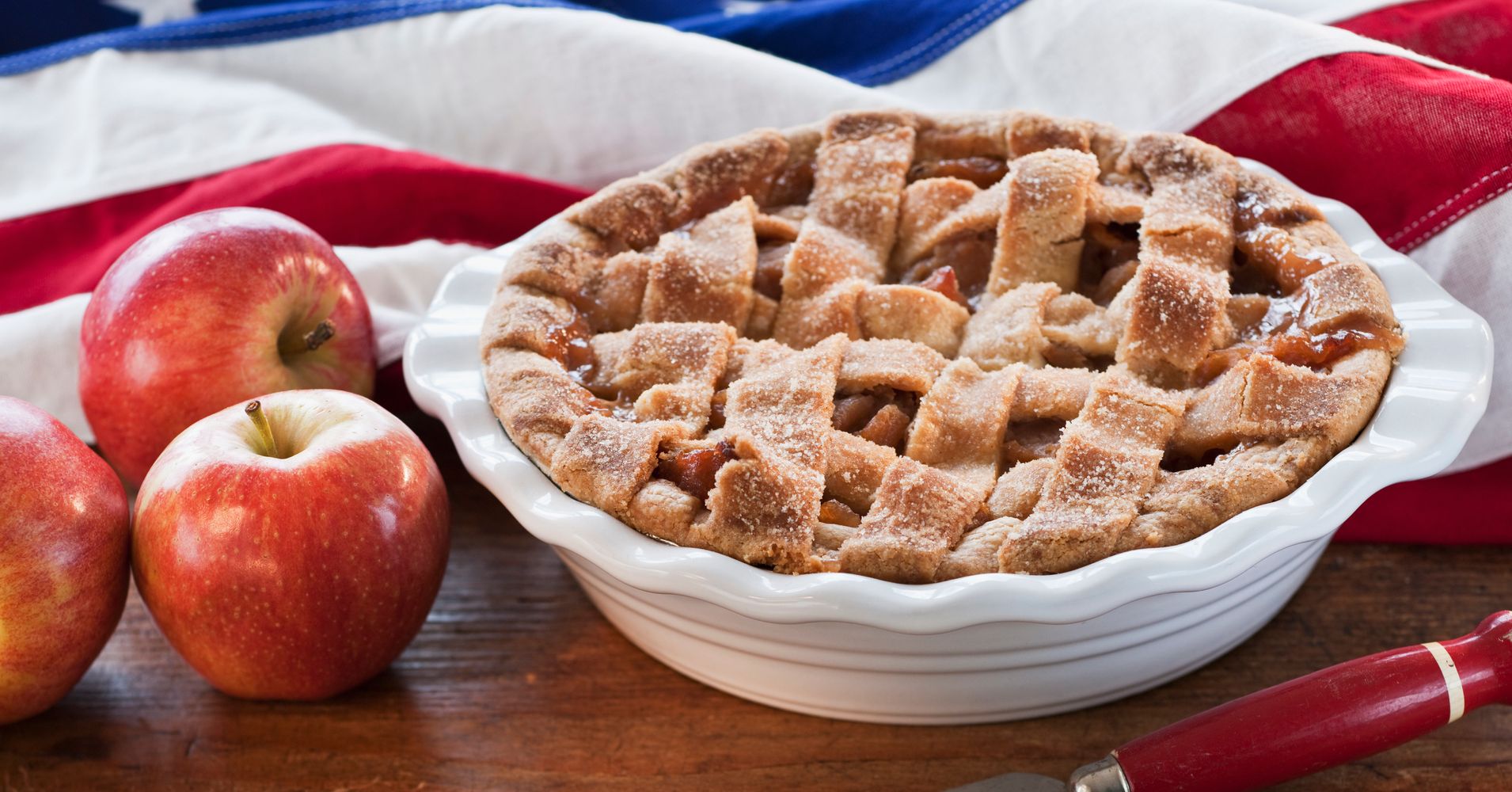 The phrase “as American as apple pie” has been synonymous with patriotism in the United States since around 1860, conjuring images of flaky baked goods resting on gingham tablecloths.

On the surface, it makes sense. Apple pie is a simple, straightforward dish, hearty and reliable ― qualities that Americans once associated with themselves. And apples are grown commercially in 32 states, so it’s easy to see why that fruit would become part of the iconography of our country rather than, say, the orange or the pineapple.

Yet ironically, apple pie isn’t American in its origins.

The United States has long been a place where people from other countries came to start a new life. American tables have been enriched with their contributions. (Indeed, if the inhabitants of North America had built a wall 400 years ago, we wouldn’t be serving apple pie ― or anything else ― at July 4th celebrations today.)

Even the ingredients in apple pie aren’t native to North America; every part of the dish originated from somewhere else, from the components to the way it’s made. Our modern apple pie is one more example of how immigrants helped create the vision of the United States that we honor today.

Here are a few nods to the cultures that we can thank for making our iconic dessert so “American.”

We can thank England for the crust.

The foundations of the quintessential apple pie, the kind featured in Norman Rockwell paintings and crude teenage comedies of the early 2000s, can be traced back to England.

YouTube chef Katie Pix, writing on Jamie Oliver’s website, described how ships in the 12th century carried their own livestock and cooks to provide food for sailors and merchants. But that wasn’t an efficient use of limited space aboard, so they found a solution: cooked meat encased in a crust. “The hardened pastry packages were not necessarily eaten ― think of them as disposable medieval Tupperware,” Pix writes.

Pies baked with a double crust have been prepared in England ever since. In time, they started putting fruit in the pies. Early English settlers brought this style of pie with them to America. Eventually, the crust was reimagined so that it could be eaten, too.

The French perfected the shape of the pie.

French immigrants came to America as early as the 16th century, seeking freedom from religious persecution and opportunities to expand trade. With them came their rich baking traditions.

Today, beginning bakers may start with the plain galette before diving into pie baking. It’s a rustic treat that looks like something a resourceful American pioneer would bake while traveling west (it doesn’t even require a pie tin), but it’s perfectly French.

Other variations on the baked apple have French origins as well. Layering fruit in a circular pattern and using a flaky crust can be traced back to the French galette de rois, a pastry served to celebrate the Catholic Epiphany ― which was especially important to French Canadian immigrants.

And pies that contain a heaping pile of fruit with a sugary glaze and no top crust are closely linked to the tarte Tatin, a dessert invented in the late 1800s that made its way to America when a second wave of French immigrants arrived between 1870 and 1890.

The Dutch chipped in with latticework and pie spices.

The Instagrammable pie art created by bakers like Seattle’s Lauren Ko today is truly something to behold. But that fancy latticework owes something to the influence of Dutch bakers.

Latticework pastry began appearing in Dutch still life paintings dating to the late 1500s. According to Penny Stankiewicz, chef-instructor at the Institute of Culinary Education, Dutch apple pie recipes can also be traced back as early as the 1500s.

“This pie appears to have its origins in the Netherlands,” Stankiewicz said, “and later became known for the lattice crust.” In time, she noted the streusel topping that Americans now associate with Dutch apple pie became popular.

But before then, the Dutch would remove the top crust of the pie to grind the filling and add spices. Stankiewicz said that the open-faced pie “logically appears to be the precursor to the development of a crust that you can see the filling through, such as a lattice. When the lattice appears in the recipes, they can also call for pouring the cream through the lattice work, instead of working it into the filling at the grinding stage.”

Dutch immigrants have been present in America since 1609, leading trade and commerce through the Dutch East India company. Their global trade routes were responsible for the importation of key apple pie ingredients, such as cloves, nutmeg and cinnamon.

Apples, sugar and wheat didn’t originate in the U.S.

America’s earliest immigrants brought apples and apple seeds with them from Europe. The plant thrived and spread across the country with the settlers.

But according to research conducted by horticulturist Mark Reiger, apples were first cultivated in the Middle East and Central Asia, their “roots” being traced to parts of Turkey and Kazakhstan. The only variety of apple native to America is the crabapple, which was deemed inconsumable by most settlers, except in the liquid form (aka cider).

While it seems strange to think of a pie without its sweetness, the story of how sugar came to the United States is anything but. Sugar was one leg of the 18th-century triangular trade that brought enslaved people from Africa to America.

According to James Walvin, who wrote Sugar: The World Corrupted From Slavery To Obesity, truly U.S. sugar “had to await the settlement and acquisition of Louisiana in the early years of the nineteenth century.” At first, it was something only the wealthiest Americans could afford.

The origin of flour can be traced back to the Middle East thousands of years ago. American wheat as we know it wouldn’t exist had it not been for Russian immigrants who brought Turkey Red seeds with them in the 1800s.

Beyond the origin issues, apples aren’t even in season by the time Independence Day rolls around. The fruit is mostly at its prime from mid-September through October. Last month in The New York Times, food and wine writer Florence Fabricant even said, “I would not consider serving apple pie for the Fourth of July, despite its national symbolism: The calendar is not ready for apples.”

In a survey conducted by Delta Dental, only 14 percent of Americans actually chose apple pie as their favorite. Thirty-six percent picked pumpkin instead ― so maybe we should be saying “as American as pumpkin pie.” Pumpkins are more native to North America ― although the pumpkin’s origins go back to Mexico).

As your double-crusted baked goods cool on the windowsill this summer, take a moment to thank the generations of immigrants who preceded you. Without them, we couldn’t have our pie and eat it too.

Light Red Wines: What To Drink When You’re Over Rosé