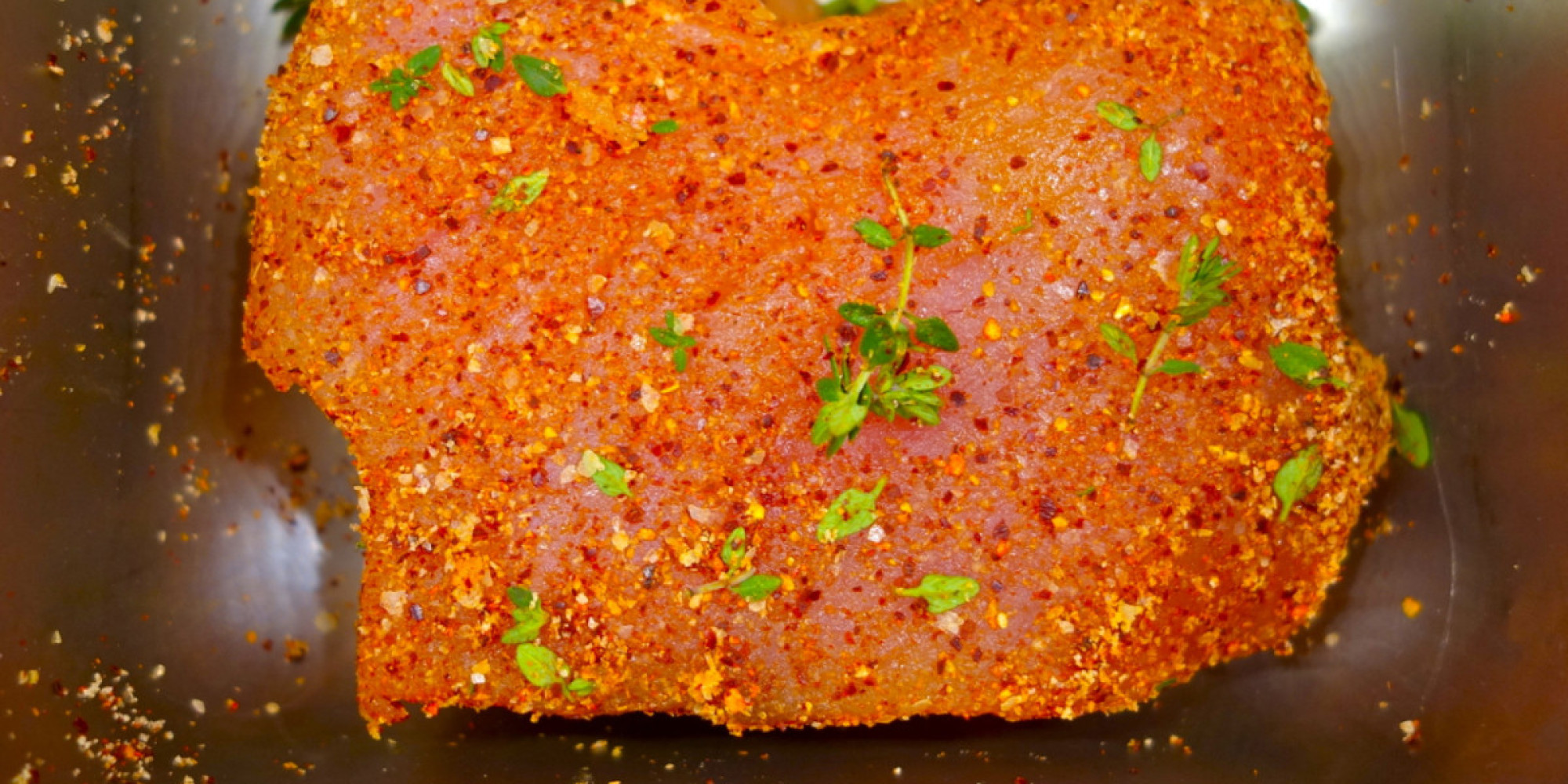 Not that long ago, at the excellent London restaurant Green Man and French Horn, Jackie and I shared a dish of veal tongue and tuna dressed with anchovy sauce – think of vitello tonnato if you want a point of reference. The tuna was amazing: big, tender but substantial flakes with astonishing flavor. I figured it had been slow-cooked (confit) in oil or fat, but wanted more details, so I wrote to the restaurant’s chef-partner Ed Wilson and asked him how he’d prepared it. The answer surprised me: “We do nothing to it except open the tin! It’s the quality of the fish that makes it an exceptional product.” And it is indeed exceptional, from a Spanish company called Don Bocarte. I’ve found some on line and have ordered a few cans for special occasions.

In the meantime, the notion of confit tuna stayed with me, and when I saw a nice piece of yellowfin at the farmers’ market I thought I’d season it well, then slow-cook it in duck fat and serve it tepid with some of the fabulous tomatoes we’re still getting. The idea was that it would share the attributes of Mr. Wilson’s superior canned stuff: it would be ultra-flavorful and would readily break into big flakes. But because it had been freshly cooked it would have qualities of its own derived from its seasoning and the fat in which it had been poached.

Slowly cooking fish in fat is not unknown territory: Before I stopped buying salmon (it’s easier to eliminate it than to worry about its provenance), I’d sometimes poach it in duck fat in a kind of South-Western French way, though the fish would be kept medium-rare at its center. Here, the idea was to evoke fully-cooked canned tuna, but with a lighter hand than the preserving process demands.

Still, I thought I’d retain the South-Western French reference, so about an hour before cooking (and two hours before dinner) I rubbed my thick 11-ounce (310-g) piece of tuna – it would have sufficed for three portions – with a mixture of crushed dried piment d’Espelette, salt and thyme and left it in the fridge to absorb the flavors. I took it out after three quarters of a hour to let it come up toward room temperature and meanwhile melted about a cup of duck fat (olive oil would have been fine for this dish too) in a little saucepan just large enough to hold and submerge the fish; I added a sprig or two of thyme and two peeled cloves of garlic. I set this in a larger pan containing enough barely simmering water to rise three quarters of the way up the saucepan. In went the fish (I did not wipe off the seasonings) for about 40 minutes. From time to time I checked the temperature of the fat to make sure it hovered around 180 degrees F (82 C); as long as the water didn’t come to a full simmer, this wasn’t a problem and didn’t require all that much attention.

When the fish was cooked through, I removed the pan from its water bath and set it on the counter to cool a bit. I peeled and thinly sliced three very ripe end-of-summer tomatoes and made a simple dressing of lemon juice, lemon zest and olive oil, seasoned only with salt.

I removed the fish to a plate and blotted off the excess fat, then flaked/shredded it with my fingers. On each plate I laid out a layer of tomato slices and dressed them with the sauce, then topped them with pieces of tuna, which I also drizzled with the same dressing. I served some sautéed potatoes on the side, though lightly grilled bread would have been a nice idea too.

The fish was delicious. It had a softness of flavor from the duck fat, with an easily detectable hint of garlic and thyme; every bite had a gentle pop of chili. It had substance, too, in a way that ordinary canned tuna hardly ever does. The flesh itself was enticingly tasty, as fashionably rare or raw tuna really cannot be: raw/rare tuna and cooked-through tuna are entirely different things, and neither is to be despised.

This not-canned tuna would be terrific, if inauthentic, in a salade niçoise – or served with lemony home-made mayonnaise on open (or closed) sandwiches.