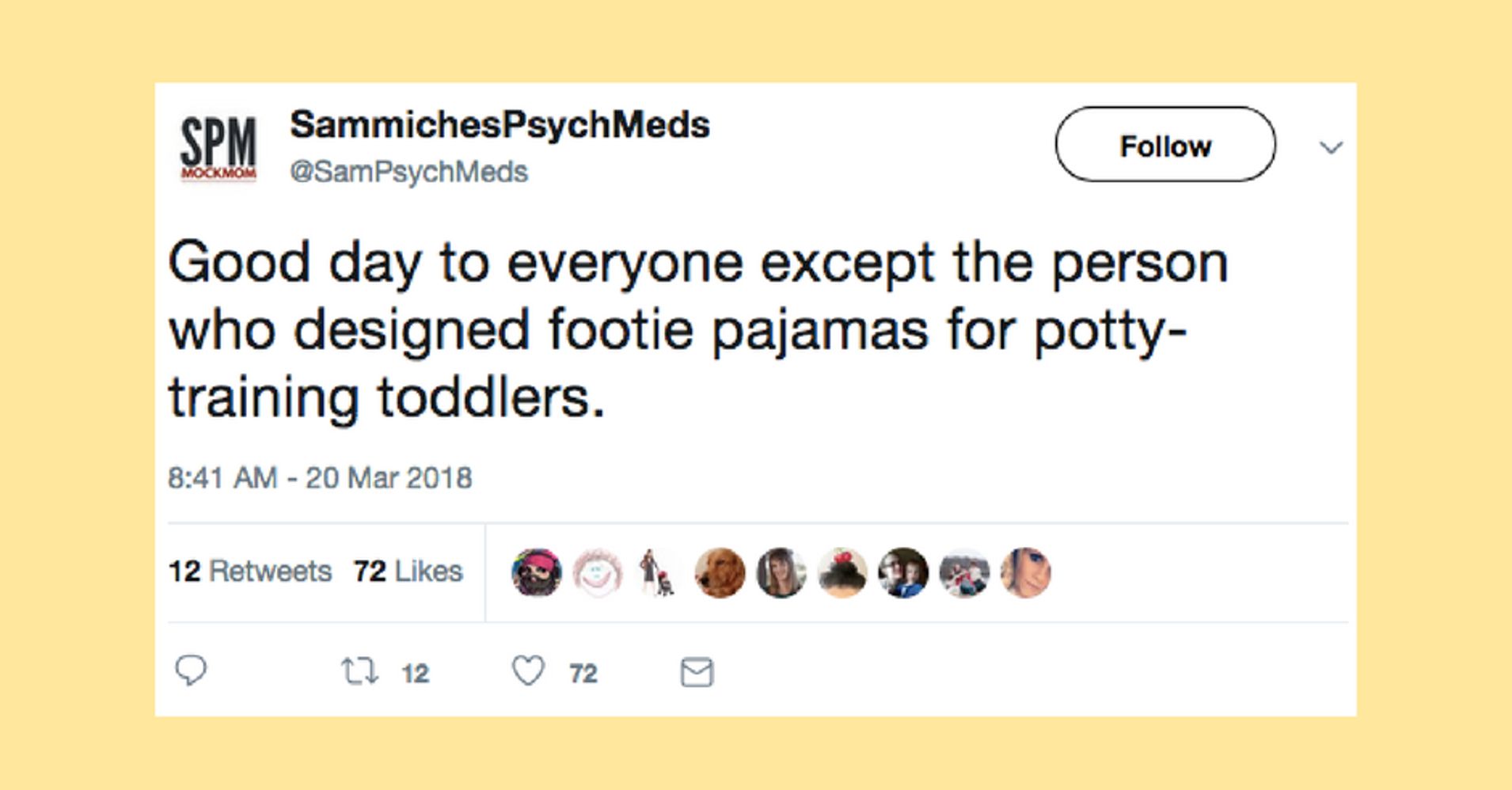 Kids may say the darndest things, but parents tweet about them in the funniest ways. So each week, we round up the most hilarious 280-character quips from moms and dads to spread the joy.

Good day to everyone except the person who designed footie pajamas for potty-training toddlers.

Just did green bath water for my toddler if you were wondering how turnt St. Paddy’s is gonna get in my household.

Parenthood means a 3-foot tall person standing at your bedside at 6 a.m. to tell you that worms have two butts.

If you want to spend 4 consecutive hrs being forced to pretend to eat a sandwich made of LEGO, I highly recommend hanging out with toddlers.

Dinner is a great time for my family to come together to tell each other exactly what is wrong with the meal I made.

5-year-old: Do I have to change my name if I get married?

Me: Only if you want to.

I love waking up to the sound of my kids laughing. Especially at 3pm because that means I got a little couch nap.

Kids save all their deepest questions about the universe for when you’re singing along to a really good song in the car.

How angrily are you supposed to put your kids to bed? Want to make sure I’m doing it right.

My daughter thinks it’s hilarious when I accidentally get her math questions wrong but the joke’s on her because it’s not an accident and she’s on her own for homework for 10 more years.

6yo: I just invented “guaca-meowy” where you get chips, guacamole, and a cat
Me: <crumples up note that says “faj-cheetahs”> Ok yours is better

My 7yo’s so excited there might be a snow day that he went to bed early.

I’m so excited he went to bed early that I didn’t tell him school’s already canceled.

It’s hard to imagine how you could simultaneously love something so much and want it to shut up so badly until you have kids.

Me: When I was your age, do you know what I played with?! Do you? A blade of grass, that’s what.

My Mom: You had a Nintendo, probably 30 Barbies…

My six year old just asked me to watch a show with her and then told me the entire plot before pushing play. There might be a quiz after. IDK.

I taught my daughter to cover her coughs with her arm. Unfortunately, she forgets to cover her actual mouth and only prevents germs from escaping her chin. In conclusion, my wife and I are sick. Goodnight.

No one told me that part of motherhood is pretend laughing at knock knock jokes about butts. A warning would have been nice.

That damn tooth fairy didn’t show last night. She is so disappointing.

I asked my daughter if she wanted to go outside to play in the snow and she looked at me in horror and said, “No, it’s so cold” and I have never loved her more thoroughly.

10 Recipes That Are Perfect For The Instant Pot